The Priest's Bridge: Centuries of warfare had left the bottom of the Kidron Valley yards deep with dead bodies, graves, and the rubble of countless sieges.  It was impossible to cross the valley floor without becoming defiled.  The wine and olive oil for the Temple was grown and pressed on the Mount of Olives and had to be transported to the Temple, so the Priests built a high, narrow, two tier, stone bridge across the valley so that the stone and arches would prevent the defilement from rising to the walkway at the top, and the wine and olive oil being carried across to the Temple.  It was also the path taken by the various "Red Heffers" (see Numbers: 19)sacrificed on the Mount of Olives. As the Messiah was to be the final Red Heffer offering, Jesus also led His 11 remaining Apostles over the Bridge to the Gate of the Garden of Gethsemane.  In the painting, I show them crossing the bridge beneath the glow of the full moon of the Passover.
Posted by Farmer's Art at 5:30 PM 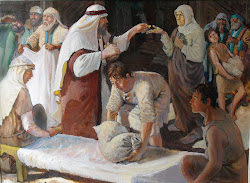